Pervoe Kino is an award-winning film production company which was established twenty years ago. It has become an expert in the field of documentary filmmaking.

The documentary 'You Rock' (2017) had the greatest distribution and the biggest box office in 2017 in Russia.


In 2022 Pervoe Kino in a coproduction with START released a feature film 'The Riot', directed by Evgeny Grigoriev. Pavel Derevyanko received the Best Actor Kinotavr Award for his role.

Whether we’re crafting a TV or YouTube commercial, we work hard to understand why each film matters to our clients and their audience, what job it needs to do.

We have created content for clients including Delo Bank, Megafon, 'Snob' magazine and Cybersports Federation.
Business video is a short film about company, event, training, anniversary and lecture video which helps your business to stand out.

Among our clients are adidas, AVITO, United metallurgical company, Usadba Jazz, Runet Bloggers Award, "Zerkalo" Andrey Tarkovsky International Film Festival.
One of the key competencies of our company is to create technical solutions for multi-camera shooting with movie cameras and optics in the resolution from Full HD to 4K simultaneously on 14 movie cameras in the mobile TV station mode. We do not just provide equipment, but also serve it at concerts, TV shows, online broadcasts of conferences and streaming of gamers. Our portfolio includes a Direct line with the President of the Russian Federation, concerts by B-2 and Diana Arbenina, a full-length film by Andrey Konchalovsky, IgroMir / Comic Con, S-Holidays, Streamcut, a presentation of Renault Arcana.

Additional direction
Pervoe Kino film company is shooting in unique locations. And for the last two years we have been shooting exclusively in 4K. Therefore we collected an original footages base.
Search for our footages on Net-Film, Depositphotos and Shutterstock.

Behind the scenes of the IX Diana Vishneva's Context festival. Vogue & Voss (2021)

The plot is based on a true story about a 10-year-old boy from a village, Ilya, whose father was killed. No justice has been done so he launched vendetta against the murderer.

How to fly to other planets? Thanks to atom it's become possible.

Could an ordinary person be a hero? Absolutely. People who create essential daily goods and products from pottery and baking to a baby birth, do make our life possible.
'Pervoe Kino' created a trailer for the "The Book of the Sea" movie

Tokyo 2020 was postponed for a year. The pressure on athletes is rising. This documentary is a collective portrait of the Russian Olympic swimming team. Among the movie characters are famous Soviet "Iron Man" Vladimir Salnikov, athletes, a coach and fans of the team.

Pablo Picasso, Mstislav Rostropovich, Yasha Heifetz: all of them along with a series of outstanding fgures of the 20th Century were captured for the flm by a man who was an outstanding person himself. Leonid Kogan was a great violinist. He was perhaps one of the
hundred in USSR who had a chance to experience the taste of freedom. This is a true story about the price of freedom for an artist. When the government suspected his intention to immigrate, they strictly limited his concerts abroad and banned him from leaving the country.
A year later the violinist died because the freedom was his oxygen.

The music video for the Joe Himself "Darling" / OST "YOU ROCK"

The Solo documentary reveals six unique stories of individuals who use the art of dancing as their own tool in fighting back difficulties, dealing with pain, incomprehension, and obstacles standing in their way to happiness through creative self-expression. Six young performers who belong to completely different styles - classical ballet, contemporary dance, krump, vogue, experimental hip-hop, pole dance - represent the new generation of Russian artists, free from preconceptions, clichés, and ready to be part of the dance revolution. The documentary format of the project looks at real people in an intimate setting and the behind-the-scenes routine of professional dancers.
'DEADLINE' (2022)

Work hard when you are young, play harder when you are retired. 'Deadline' about elderly people who see older age as an opportunity for a new adventure, new experience, new goals. Their lives are inspiring, they prove that life goes on the next level after certain age.

Rocky road to the success of three rock bands from Yekaterinburg, Russia. Young musicians are looking for their path in music and in life.

ACCROSS THE DON - this is a matryoshka film where residents make a story about a city, director Evgeny Grigoryev shoots the birth process of a film in which there are creative searches and compromises, and moments of despair.
The heroes of the debut stories of young authors were ordinary Rostovites: a graphic designer and a loader from the Nakhichevan market, a butcher who dreamed of being a jazz musician, a fire-dancer, a guy restoring the history of a constructivist house-key, a Rostov beauty ready to make sacrifices for happiness and others.

The result was a sincere and ironic film portrait of modern Rostov-on-Don, in which the viewer sees the city through the eyes of loving people. ACCROSS THE DON is the second film of the film project “City Code” in which residents explore their city, making stories about their favorite places and people, thereby formulating its pictorial and emotional code.

'The City Code. Pervouralsk' is a documentary about Pervouralsk, Russia. 12 novels were shot by city residents, amateur directors.

Each novel represents the city from varied angles. The stories were created by the residents. The participants worked under the supervision of the leading specialist of the Russian film industry. The residents chose stories and characters, then filmed and edited their videos independently. Eventually, the young filmmakers have created a video novel about gorodoshniky, local painters Yurko and Karina Koval, an engineer Alexandr Pauls, a team of firefighters, residents of remote village Denas, a rock-star Aleksey Voinskih, about local artists supporting cultural traditions.

Lekha is 16-years old farmer in Ural, Russia. His desire is to get the Internet.

Pervoe Kino is a full-cycle film company. We produce feature films, ads, music videos, business videos and video courses. Rental of our film company provides shooting equipment for TV series and full-length films, and also has an unique experience of multi-camera shooting of concerts, Internet broadcasts and TV shows using movie cameras and optics for that. 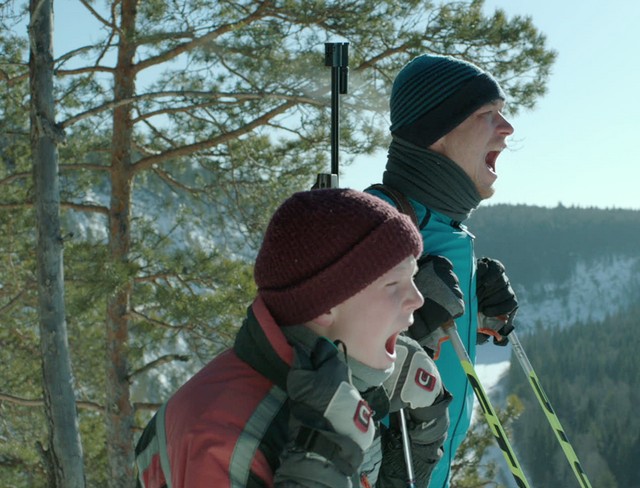